On March 15, Laurie Anderson and Reb Anderson will hold an intimate but public conversation at the Throckmorton Theatre in Mill Valley, in a benefit for Hope Cottage.

From the archives, this 1989 interview with Laurie and Reb by Dean Rolston gives a poignant glimpse into an earlier era. Published in Zen Center’s print journal Wind Bell, it was commissioned by Interview Magazine after Reb quoted Laurie in a public talk and was asked if he would be interested in speaking with her for a story in Interview. 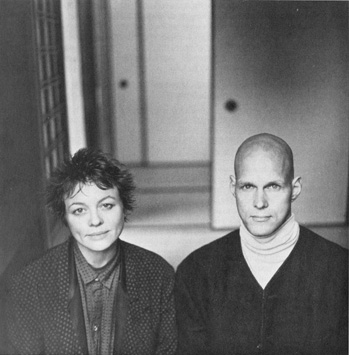 REB ANDERSON: I would say it’s using language to set us free from language. . . . It’s not so much that we use language to set ourselves free, because that would just be motivated by a desire to be free, but rather that by understanding how language is working, we recognize its unbound character.

LAURIE ANDERSON: On the one hand there’s spoken language, and on the other there’s the printed word, and in the middle there’s music — which is kind of like the chanting we did this morning. Language is a terrible trick. People think that just because they know the name, they know the thing.

RA: In fact, you never really remember the past: you’re just now making up what you “call” the past.

DR: Isn’t there some verifiable correlation between what happened in the past and, say, what’s recorded on film?

RA: To me that’s just group psychosis. Some people may have been at the event and not remember a thing that’s on the film. I feel that all history, including its documentation, is just totally concocted.

LA: Of course it’s concocted. People may read about it happening, but that’s not what really happened.

The interview was conducted in the library at Green Gulch Farm and transcribed at Andy Warhol’s Factory studios. Rolston, described in POZ magazine as a former “high-powered Wall Street attorney, art world maven and part-time Zen student,” had left New York to spend his final years living mostly in Muir Beach, and practiced at Green Gulch Farm. He died of complications of AIDS in 1994.

Due to a change of editors, the piece didn’t appear in Interview. But Laurie continued to visit Green Gulch several times in the late ’80s and early ’90s.

For information on the upcoming public conversation with Reb and Laurie, and to purchase tickets, see Anderson & Anderson in Conversation.