The 2011 Energy Oscars, held on Tuesday at the stunning Grace Cathedral, captured a palpable sense of vision, community, and respect for the earth. Several hundred people attended the awards show to see the top California faith contenders and winners in the categories of education, energy efficiency, advocacy, and green building. The awards ceremony was presented by California Interfaith Power & Light to celebrate the green energy efforts of faith communities throughout the state of California. California Interfaith Power & Light is a faith-based organization that encourages people of all faiths to be good stewards of the environment.

Unitarian Universalist Church in Fresno, received an Energy Oscar for education, though all the nominees (including St. Paul’s Cathedral in San Diego and St. Cyprian’s Episcopal Church in San Francisco) had focused on raising energy awareness in their congregations and communities. 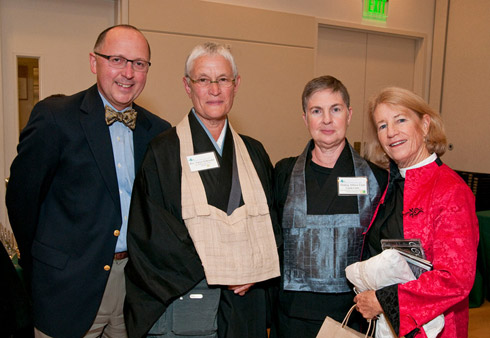 In the energy efficiency category, Trinity Church in Menlo Park and Green Gulch Farm Zen Center in Muir Beach both won in a tie. (Temple Judea in Tarzana and First Lutheran Church in San Diego also were finalists.) Both of the award winning communities worked hard on reducing their facility’s energy consumption and educating their communities. The principle of ahimsa (do no harm) is reflected in the new Green Gulch Zen Center student residential building, which has been certified as a “passive house” for using very little energy for heating and cooling.

Metropolitan Community Church in North Hollywood took home the Energy Oscar for advocacy through its earth ministry. They actually made the earth a member of their congregation! One of the more-memorable quotes came from the MCC in the Valley representative who said, “Thank you for the award, but it means nothing if we don’t save the earth.” Holy Family Catholic Parish in San Jose and Unitarian Universalist Fellowship in Santa Cruz County were the other nominees recognized in this category.

First Presbyterian Church in San Bernardino won in the green building category for installing a solar panel array and various efforts to reduce energy consumption—at the same time involving the local community. The couple accepting the award on behalf of First Presbyterian Church has been married 59 years, and they deserve another award just for that. Other nominees for the award were Our Lady of Guadalupe, Hermosa Beach; Temple Sinai, Oakland; and First Unitarian Universalist Society, San Francisco.