Can you say a little about your history with SFZC as a bread baker?

I came to Zen Center in 1977 or so and I worked in the Tassajara Bread Bakery in San Francisco from 1980-1993. I worked all kinds of different positions; making bread, pastry, cakes, as production manager, manager of the retail store…Eventually, SFZC sold the bakery and I inquired at [City Center], where Blanche Hartman was tenzo [head of the kitchen]; how would it be if I came in to use the kitchen and produce bread for the community? 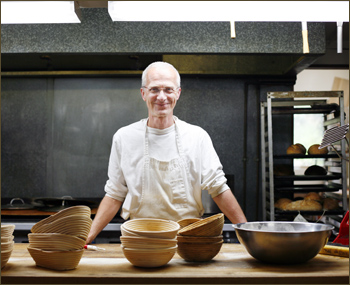 Soon after, Fu Schroeder, director of Green Gulch Farm, asked my wife and I if we wanted to live there, and I wound up baking the bread in their kitchen. For years we were wondering how we could create a dedicated space for a bread bakery and, about 5 years ago, we got a substantial donation which enabled us to build the bakery and equip it with the appropriate tools. [That’s when] I began offering workshops.

What attracts people to bread baking?
Bread making itself is mysterious. It’s mysterious to me and I’ve been doing it a long time. Just like we say here [at Green Gulch] when we start our growing season: We don’t know how or why a seed makes a plant. The history of bread making in the West goes back thousands of years and I have a feeling, in our genetic makeup, there’s an appreciation of the act of bread making. It represents the home, food, nutrition… And it’s always been associated with Zen Center. Starting with Ed Brown’s Tassajara Bread Book. It’s always been an important part of the ethos. There’s meditation and there’s bread.

People often hold a misconception of how difficult it is to make bread. What are your thoughts on this?
My experience of doing the workshops is that people either know or feel that baking is different than cooking. Baking bread is also different than baking cakes or pastry and one of the things that makes it different is that there is some life involved. It involves working with living organisms — yeast and bacteria collaborate to produce, eventually, what we think of as bread. It’s a lively process. It’s dynamic and it’s different every day, even for me. Even though it’s very straight forward, it’s easy to go to the wrong place and fail. 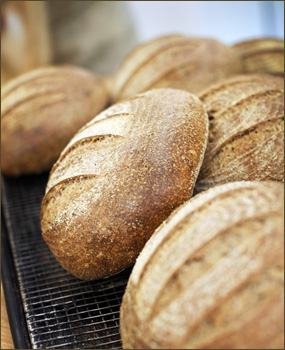 Every time, at least one or more people say, “I tried it once, it didn’t work. I want to know why and try it again.” If we don’t take care of the yeast it might not work or if we choose our flours in a way that doesn’t encourage the kind of bread we want to make, it might be too dense.

In an increasingly complex world, there seems to be something attractive about the simplicity of bread making.
There’s a million ways to make a bread. But at heart, every baker eventually comes down to some basic relationships, and those are the kind of relationships I try to highlight so that people can work with them however they want. People can then look at a recipe — or they can make one up themselves – and they know what areas they can experiment with and what they have to hold solid. Is this gonna be fatal if I take out the honey? What happens if I put in more salt? Certain things will have dramatic consequences and certain things won’t.

Can bread making be a meditative practice?
In all the simple ways it can…you’re paying attention to every step in the process, you plan ahead a little bit, take the temperature of the ingredients, you make sure it’s not too wet or too dry, and every day is going to be different. The process is forgiving yet you don’t do things out of order… you’re working with mysterious activity. You could even call it alchemical. Certain things have a certain form when we start and, by the end of our working with them, they have another form. They become something you can eat, carry, and offer as a gift — and it all came from humble beginnings. And the way that happened was by letting nature take its course. As a baker, I’m working with fundamental natural energies and, in a way, I’m doing it. In another way, I’m watching it happen. The thing that makes it bread is not me, it’s just the arrangement of all these natural energies that we call bread. You do it enough and you feel that to be a real and an important experience.