Grad Seminar in the SFZC Archives

Students at University of Washington’s Master of Library and Information Science program, led by assistant professor Joe Tennis, are organizing SF Zen Center’s archives and participating in the daily schedule, as this UW article describes. 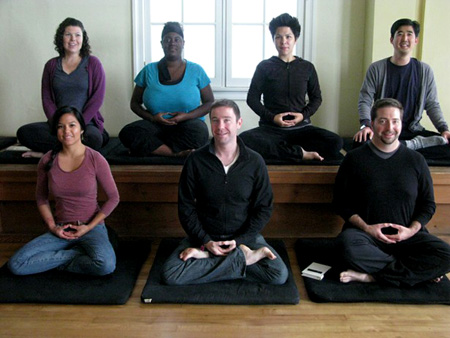 “Shortly after 5 a.m. each day in July, Joe Tennis and students in his Information School graduate research seminar spent 40 minutes in Zen meditation. It was part of their schedule as archivists at the San Francisco Zen Center.

“In the course of a day, they might handle rare books and manuscripts or brooms and dust mops – but their goal was to be mindful.

“Tennis, an assistant professor, and the six students, who are in the Master of Library and Information Science program, focused much of their work on material associated with Shunryu Suzuki, who in the 1960s invigorated Zen Buddhism in America, particularly in the Bay area.

“The Zen Center material provided students and their teacher hands-on experience. ‘Information science is usually theoretical, so I like to show the practical side, and the Suzuki library is huge and diverse – art, audio tapes, diaries, correspondence, lecture notes, personal letters and 500 books,’ Tennis said. 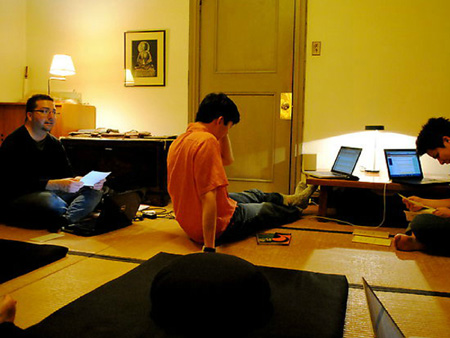 “The archive project, now in its second year, is particularly large because the center is almost 50 years old, and there’s much to be sorted. Along with the Suzuki material, the collection also includes notes on the Japanese tea ceremony written by Suzuki’s wife, Mitsu Suzuki, as well as antique Buddhist robes and even recordings of beat poet Alan Ginsberg, a practicing Buddhist, giving a talk at the center.

“‘We need Joe and his students to help us understand our attic – and it’s spread over three campuses. Everything from the sacred to the mundane,’ said Valorie Beer, secretary of the Zen Center and a resident priest. Beer said the UW crew is needed because the center would like to show off its best things for its 50th anniversary next year, but nobody there has archival skills.They also fit in. ‘We love having them,’ Beer said.

“The feeling seems mutual. ‘We want to be as much a part of the Zen Center community as possible,’ Tennis said. . . .

“In October, Tennis returned to the Zen Center to plan for next summer. The work will include digitization that will improve the center’s online presence.”