The Houston Zen Community is honored to announce the Mountain Seat Ceremony of its beloved teacher Gaelyn Setsuan Godwin, Roshi. The ceremony will take place on April 7, 2012 at 2 oÆclock in the afternoon. 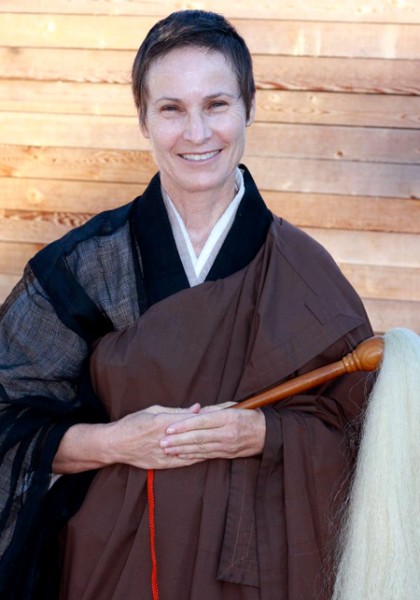 by Tricia McFarlin and Glen Snyder

Gaelyn Sestuan Godwin is a Dharma successor in the lineage of Suzuki Roshi. Gaelyn began training at San Francisco Zen Center (SFZC) in 1985 and was ordained by Tenshin Reb Anderson Roshi in January 1991. She received the Dharma name, Setsuan, which is translated as Snow Hut. Her second Dharma name is Konjin, Establish Love. She became Tenshin Roshi’s Dharma successor in 2003 in the U.S., and was acknowledged in 2005 at the head Soto Zen temple in Japan, qualifying to receive the title of Kaikyoshi. Gaelyn lived and trained at Tassajara Zen Mountain Center, SFZC’s monastery, for 12 years, serving in many positions, from kitchen crew through Director. She lived and trained at Zen Center’s Green Gulch Farm and Beginner’s Mind temple for 6 more years. She served on SFZC’s Board of Directors for 7 years and currently advises the Affiliates Council. She trained in Japan, at Hosshinji with Harada Sekkei Roshi in 1991-92, and with Robert Aitken Roshi in Hawaii in 1995¢96. Gaelyn moved to Houston in 2003 to serve as the Guiding Teacher of the Houston Zen Community.

The Houston sangha extends a warm invitation to all of GaelynÆs friends to attend this auspicious ceremony and celebrate GaelynÆs lifeÆs work in teaching the dharma. Kindly respond by January 6, 2012 to Vicki Glenn at president@houstonzen.org.