Golf in the Kingdom Opens in SF

UPDATE: Opening in San Rafael and in Monterey on Friday, Dec 9 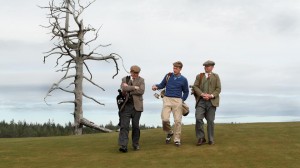 From the web site:

“Golf in the Kingdom” is adapted from Michael Murphy’s 1972 classic novel, the best-selling work of fiction ever written about the game of golf, with millions of readers in many languages.

En route to India in 1956 in search of enlightenment, a young American philosophy student – Michael Murphy – takes a Scottish detour to the “Links of Burningbush.” Seeking to enjoy one last round before giving up his beloved game, he is unexpectedly paired with the mysterious and mischievous golf pro – Shivas Irons. A wild adventure on and off the links ensues, where Murphy’s perception of golf and life are indelibly changed. Out of this transformation the two forge a deep and unbreakable bond of camaraderie.

Michael Murphy is the co-founder and chairman of the world famous Esalen Institute in Big Sur, CA and the author of the best selling book Golf in the Kingdom, on which the film is based: “Since the days of the Greek Olympic Games, sport has been a theater of bodily and spiritual transformation. In the East, the martial arts have embodied mindfulness-in-action and have dramatized the occult powers of athletics. Today, East and West meet through sports charged with constant record-breaking that points toward new frontiers of the spirit and the flesh.”

UPDATE: Join the filmmakers in San Rafael and Monterey, CA. 2012’s Theatrical Schedule will be announced after the New Year!

The film was shot primarily on location at the Bandon Dunes Golf Resort, Bandon, Oregon.