From Busboy to Cook to Chef

Jerome Waag – who lived at Tassajara for two years around the turn of the millennium and was a summer guest cook there – will be the successor to David Tanis as co-chef at Chez Panisse, Alice Waters’ Berkeley restaurant. 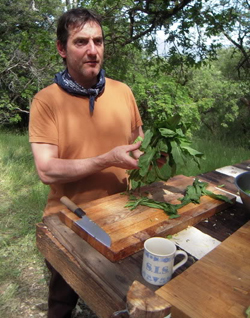 Jerome began at Chez Panisse as a busboy in the 1980’s and became a cook there in 1991. He is also an artist and one of the founders of OPENrestaurant.

Jerome’s new position as co-chef is one connection of Chez Panisse with SF Zen Center, but there is another connection as well: Alice Waters was honored by SF Zen Center with a “Most Important Thing Award” at the Annual Benefit Event in 2008. And her cookbooks have inspired many aspiring cooks and been lovingly referenced and battered in the Zen Center kitchens.