“The Way,” a film written and directed by Emilio Estevez, will be released on October 7 and opens in San Francisco on October 21 at the AMC Van Ness Theaters. 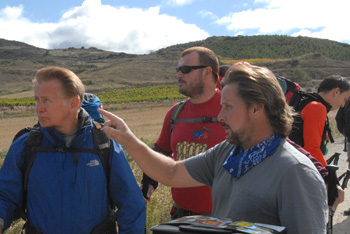 At a press and publicity pre-release screening in August, I watched “The Way” and stayed for the Q&A following.

While the film presents an adventure of self-discovery more than a specifically spiritual journey, it focuses on the most important aspect of spiritual endeavor, which is relationship—to ourselves, to others, to our environment, and to the mysterious workings, mundane to transcendent, of life and death.

After Tom (Martin Sheen) learns of his son Daniel’s death, he is sitting with a priest in a church. The priest asks Tom, “Would you like to pray with me?” and Tom answers gruffly, “What for?” His response can be heard as anti-“religious,” but it can also be heard as the dryness of grief. Daniel died while on pilgrimage on The Camino de Santiago, also known as The Way of Saint James. Tom travels to France to identify his son’s body and have him cremated. He decides to walk The Way with his son’s ashes. One of the most poignant moments is when the French policeman who has overseen the viewing and cremation says to Tom as he begins his pilgrimage, “I too have lost a child.”

Daniel died alone, but Tom, who seems to wish to be alone, finds that it is not possible, as he “collects” three other pilgrims along The Way, all with their own troubled backstories. Their friendship is one of shared adventures and even shared cynicism, but they all make the full journey, perhaps because they have traveled the pilgrims’ road together.

In the Q&A following the showing, Emilio Estevez mentioned his allusion to the “Wizard of Oz” in his character development of the three companions Tom meets, searching for “courage,” “a heart,” and “a brain.” There is no wizard, exactly, and the film does not provide easy answers to whether they find what they are looking for, but Tom has softened and it has been with their help.

I highly recommend this film, as a story and as a reflection on pilgrimage both symbolically and inspirationally. It made me want to walk The Way.