From Where I Sit

From the vantage point of my office, I’ve watched hundreds of people stop over the years to take a picture of the unobtrusive wooden sign that reads “Zen Center.” 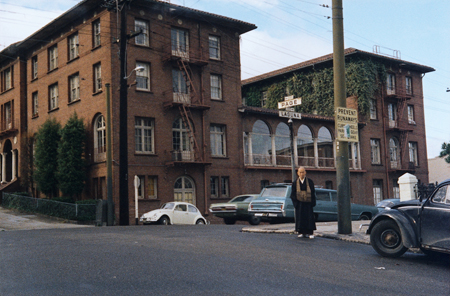 Since 1969 City Center has been the urban presence of San Francisco Zen Center. The building, made of brick and literally built on a stone outcropping, seems rather fortress-like. But it’s not at all a fortress; it’s actually open and very permeable.

From where I sit, I can see the Laguna Street entrance to the zendo and view people gathering outside, waiting for the doors to open for evening zazen. There’s a tidal quality to this activity; going in and taking a seat and then getting up and going out into the world.

There’s a wonderful photo of Suzuki Roshi next to the Page and Laguna Street sign, a VW Bug parked to the side, and City Center clearly in view behind him. You can almost hear him saying “The zendo’s open; won’t you join me?” At the time the photo was taken, the sign was not yet affixed to the building. And there is nothing in particular to indicate that this building would become the locus of a community and way of life that would help shape and transform the culture and spirit of the Bay Area.

From my office I also see the years of dedication and support that built Zen Center; the sustained effort of teachers, students, members, and of course the generosity of our donors. Teacher, student, member, donor—all part of the Zen Center mandala. 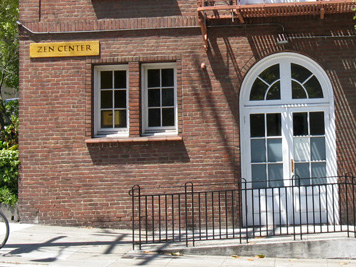 Just as I was writing this, another person stopped to look at the sign. I wonder who they are; where they’ve come from; and where they’re going.