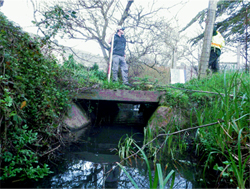 Bridge at bottom of project area. This bridge is used as alternative access for Green Gulch Farm and as emergency access by Golden Gate National Recreation Area (GGNRA).

In late July, Zen Center was awarded a $200,000 grant from the National Oceanic and Atmospheric Administration (NOAA). This award, stemming from the Estuary Restoration Act, is funded under the Department of Defense via the Army Corps of Engineers.

After discovering Coho salmon spawning in the Green Gulch Creek in 2008, Zen Center reached out to experts and government agencies to launch an effort to restore the habitat for Coho salmon (an endangered species), steelhead trout and California red-legged frogs (both threatened species).

With a grant from the California Department of Fish and Game, a design by Prunuske and Chatham Inc. to return Green Gulch Creek to its original path was completed in 2011. Zen Center is now engaging partner agencies and funders to support implementation of the first of two phases of the project, which is planned to begin in the fall of 2012.

Providing and maintaining suitable habitat is an important part of the Zen Center’s mission as an organization and as an organic farm. Removing the concrete barriers that predate Zen Center’s ownership of the land and allowing the creek to flow naturally promotes Zen Center’s aim of living harmoniously within the farm’s ecosystem.

This creek restoration follows a similar effort downstream of Green Gulch within the Lower Redwood Creek. The Redwood Creek Watershed is within the Golden Gate Biosphere Reserve, one of the 411 reserves designated by the United Nations Educational, Scientific, and Cultural Organizations (UNESCO) to provide a global network representing the world’s major ecosystem types. In addition to its local and regional importance, the watershed is part of one of the 25 global diversity “hot spots” recognized by The Nature Conservancy and targeted by the global conservation community as key to preserving the world’s ecosystems.