Background: Berkeley and San Francisco Zen Centers have been central to changing how Zen Buddhism is practiced in America—adapting and incorporating traditional Japanese rituals to the needs of an American population. 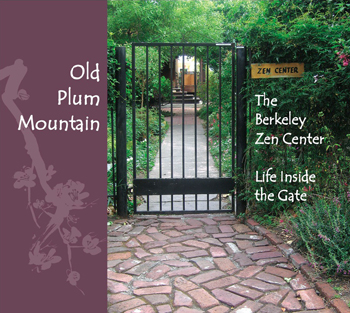 “Old Plum Mountain: The Berkeley Zen Center, Life Inside the Gate” is a documentary film by Ed Herzog that shows how these Buddhist pioneers created a new practice of Buddhism that has widened Buddhism’s appeal in the Bay Area and around the country, helping to popularize eastern spiritual practices in the West.

Why would people rise at five o’clock in the morning every day to sit for forty minutes in silence? What is it about Berkeley Zen Center that is so appealing and unique? What is it about zazen practice that is life changing, life affirming, and yet, for many, so difficult? “Old Plum Mountain” answers these questions through interviews with BZC’s members, and by documenting its various activities, practices, ceremonies, and rituals.

The documentary traces BZC’s beginnings from the time Shunryu Suzuki Roshi first came to San Francisco from Japan in 1959 and then became the founding teacher of San Francisco Zen Center and of its monastic location, Tassajara Zen Mountain Center, the first Zen monastery outside Japan. The practices and rituals at BZC can be traced back to a 13th century monk, Dogen Zengi, who founded the school known as Soto Zen.

In 1967, Suzuki Roshi and his student Sojun Mel Weitsman founded Berkeley Zen Center. Suzuki Roshi died in 1971, having successfully planted the seeds of Zen in California. In September 1979, Berkeley Zen Center moved to its present location on Russell Street where a new zendo, or meditation center, was constructed to serve the community.

A sesshin is an intensive period of meditation. We go behind the scenes to hear from the cooks, work leaders, sesshin director, abbot, and food servers as they practice their activities in mindfulness.

Inside the small kitchen off the main courtyard, four men and women have been preparing meals since 5:00 am. It’s silent but for the sound of bubbling oatmeal and the chopping of carrots. The head cook, or tenzo, describes how her job deepens her practice. “Taking a grain of rice, putting it in some water, adding a little heat. And then when it’s just right, taking the lid off, stirring it. I feel like in some ways this practice is doing the same to me. Cooking me very slowly.”

During sesshin, all meals are eaten in the zendo, oryoki style, a ceremonial way of serving and eating food with origins in Japan. Like a quiet, stylized dance, servers move up and down the zendo aisles, bowing, serving and ladling food into each of the three oryoki bowls.

“When we do eat, we sit in zazen … this is the emptiness side. Servers bring the food, which is the mundane side … you become more connected with the food, with the service, and the whole thing becomes a wonderful act of the mundane thing called eating,” describes BZC Abbot Sojun Mel Weitsman.

“Old Plum Mountain” weaves together these rich tapestries of ceremonies, rituals, and practice and shows how BZC has crafted them into a unique version of American Zen. Both inside and outside the gate, it tells the story of its members, men and women of all ages who engage in this spiritual practice that is life changing, affirming, and transformative.