“If they left, as Stuart said they had to, the pumps drawing water into the standpipe system and pushing it through Dharma Rain would run out of fuel. The sprinklers would sputter and stop on the rooftops. The fire would pour into that vacuum. Even the stone kitchen would burn, as the old zendo had, the fire consuming cookbooks and the wooden shelves that held them and warping the steel sinks and hanging steel racks used to cool freshly baked loaves of bread. Everything that could would burn.” 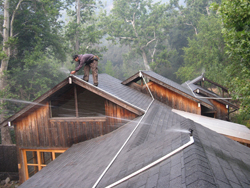 It is a challenge, particularly in a Zen community, to say that we truly know anything—and yet one thing we do know with some certainty is that fire will again threaten the Ventana Wilderness and Tassajara Zen Mountain Center.

A 100-year mapping of fire in the area around Tassajara shows that the monastery and hot springs resort has been regularly threatened with a major fire in the immediate vicinity once every 20 to 30 years.

The Ventana Wilderness area in which Tassajara Zen Mountain Center sits has a long history of wildfires which occur naturally with regular frequency, often breaking out during the arid mid-to-late summer months and started by lightning. While nature is the most frequent source, it is also the case that Tassajara is vulnerable to fires that are a result of human activities.

It has been three years since the skies over Tassajara darkened with orange light and black smoke from fires that had already burned 51,125 acres of rugged mountain country before turning on the wind and heading toward Tassajara. Since June 2008, when the Basin Complex Fire came dangerously close to burning Tassajara, the Tassajara community has focused on improving its capacity to meet any future fire threat.

A key component of the overall plan for sustainability of Tassajara as relates to potential fire threats, is the establishment of the Dharma Rain system, the name given to the jury-rigged system of plumbing pipes that Zen students scrambled to secure to the roofs of Tassajara’s main buildings in 2008 in an attempt to keep them wet – and fend off or delay the ability of the fire to take hold and destroy them.

It is our hope to have a complete Dharma Rain system established at Tassajara before the beginning of the next fire season, and we are working now to raise the $75,000 needed. To make a donation, click here: Dharma Rain: protecting Tassajara during wildfires

To support this project or to receive more information on the complete list of infrastructure projects at Tassajara, including the overall fire prevention and protection plan, please contact Kate Frankfurt at kate.frankfurt@sfzc.org