People often ask me why I get tattooed and why I have so many. I have 40 tattoos, including one that covers my entire back. Being tattooed has helped bring me back to my body: to quite literally mark it as my own and take ownership of it. 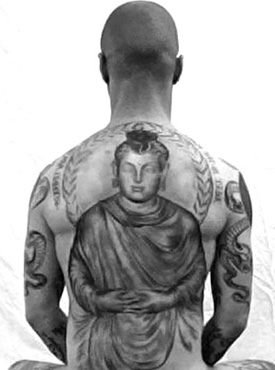 It no longer belongs to those who abused me or to the doctors and surgeons. Being tattooed is certainly not the only way I truly inhabit my body; Zen Buddhist practice—especially zazen—and yoga, certainly help me in this regard.

One of the text tattoos, a poem:

Satori
Don’t think
That it will be glorious:
That momentary burst
Of radiance
Illuming all.
Nonsense
It is more like
Losing your mother
In a large Department Store forever.

I have always loved this poem yet I do not know who wrote it.

My back is covered by an exact rendering of the Buddha on the main altar of San Francisco Zen Center. The statue is an ancient Ghandara Buddha from a formerly Buddhist region in Afghanistan. This statue has very deep meaning for me. It is not an Asian Buddha at all; it is Western, with a European face, done in the Greco-Roman style because Ghandara was a Greek outpost at the time the statue was carved. For years, this fact was lost on me as I sat in the Buddha Hall and struggled with the idea of this “Asian” religion. But, it hit me one day that this Buddha I was sitting in front of was Western, like me, and that Buddhism is not about race or culture, but about something universal that is in all of us.