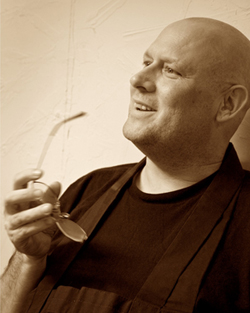 Photo of Keith by Brianna Kirby

In 1986, Autoimmune Inner Ear Disease (AIED) left me profoundly deaf for several months. Over the following year, half my hearing returned, leaving me severely hard-of-hearing. Not much was known about AIED back then, and not much more is known now. Statistics said I would possibly become deaf “probably within 10 years.” I took on the task of preparing for the possibility with classes in American Sign language (ASL), and Deaf Culture. Ten years passed, then another ten. It started to appear I would beat the odds and remain hard of hearing, and I settled in as a hard-of-hearing person in a hearing world.

A year ago, my hearing began to fluctuate, and by June 2010, I was profoundly deaf in the right ear. By September, three months later, the left ear became severely deaf. Despite preparing for it in advance, it surprised me a great deal, and in unexpected ways. Prior to September, I never thought of Deafness as being more than a moderate challenge. I still appear the same to others, for the most part. I think this may be why I experience frustration and impatience, sometimes, on the part of others with whom I interact. The fact that I can speak clearly adds to the expectation that I will hear you if you speak louder, or exaggerate your lip movement. (Both of which only make it more difficult.)

Upon my arrival in 2003, the first thing I learned was the many forms, rules and alternate ways of looking at things, that all made practicing as a community possible. I did arrive hard-of-hearing, but little accommodation was needed. The many bells, blocks and gongs continued to be audible for the most part, and sitting near the speaker during talks allowed me a semblance of normal participation. In 2009 I experienced a noticeable decrease in my hearing. The possibility of more hearing loss was again part of my experience, and I began to refresh my ASL skills. Since September, these sound signals are no longer audible to me, except for the big Densho bell and Large gong, when I am very close to them. … 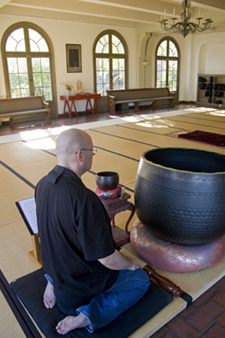 Photo of Keith by Brianna Kirby

We are creatures of Body & Mind, and deafness has shown me that the two are not really separate at all. The term “sense aggregates” is more than just an intellectual concept now. With the perception of sound gone, it is much clearer how tightly it was interconnected with the other senses. The “assemblage” of my senses work differently. Sight is changed to pay more attention to movement, and what I watch. Seeing people getting up from meditation takes the place of hearing the gong. Touch is one the way people get my attention; touching others is something we avoid in Zen practice, in most situations. It has been difficult to keep my voice at a normal level. At normal levels, it’s just not there for me, and seems weird. When I talk loudly, I can feel vibrations and hear a vowel-like sound in one ear. Nothing I could understand; but perceiving sound has the comfort of familiarity.

Deafness is pressing me to begin over again, and change the way I think and act, both habitually and cognitively. One of the hallmarks of our practice is to learn to do things mindfully, and with attention. Walking, talking, and our myriad mundane activities, are all brought under the umbrella of mindfulness. With sudden deafness, all these activities are no longer supported, or “checked” by hearing. Most of us have, at one time or another, slammed a door too loud, and the very slam served nicely as our correction, the moment the loud noise assaulted our ears. Walking loudly, slamming cabinets, and talking extra loud have all come up again. Are the dishes clacking loudly? Are those flip-flops smacking my heels too loudly? An oryoki meal is a real mystery now! The Deaf are notorious for being noisy and banging things down. Deaf comic strips and Deaf comedians poke fun at the bane of hearing partners of the deaf who can’t get them to stop being loud with objects. From a Zen perspective, sound has now become an indirect experience, not really existing except from a perceptional point of view. Like the emotion of anger. It’s effects are there, but you cannot see anger itself.

Interacting with the community as a whole is a new challenge. Without really knowing for sure, I experience diverse reactions from others. Some people are obviously hesitant or afraid, and have not yet tried to communicate with me to much of an extent. Others are just finding it easier to let me be. Still others are signing a few words, or engaging in notes. My emails are growing by leaps and bounds! Talking is gradually becoming very prosthetic in nature, to me. It’s not natural anymore. At least not for casual communication purposes. Of course I will still use it, but voice is becoming my second language, eventually to be used as a backup language. This will take some time, however. At first, I would tap someone on the shoulder and ask a question. Then I would have to apologize for not being able to hear them. Of course I would get strange looks! This happens much less now. Hearing aids or cochlear implants are not an option for me, and lip reading yields less than half of the information needed; even to the expert lip reader. ASL will give me equal communication with other signers. I understand now why the Deaf cherish American Sign Language.

Being a Deaf priest and resident at City Center my thoughts turn to possible ways we can be accessible and welcoming to the hard-of-hearing, the Deaf and the Deaf/Blind. There are multiple ways to accommodate each of these groups, and while some of the methods overlap, such as captioning, no one method accommodates everyone. Sign Interpreters, Captioners, and Loop systems for Hard-of-hearing are the primary ways to meet these needs. Over the last few months, I have been attending many functions for the Deaf and hard-of-hearing. I was surprised to see that the challenge is ongoing. With a variety of possible hearing categories, you never know if you will have mostly Deaf, or hard-of-hearing, or possibly none at all, for a given event. This is largely due to the Deaf Community’s mixture of Deaf, hard-of-hearing, Deaf-blind, and hearing. Even within these groups there are subgroups. The profoundly deaf consist of those born deaf, and those deafened later in life, for example. All these groups have their “best way” of public communication. I was impressed with the creativity that is used to address the diversity. Some offered a different method each night for repeating events. Others polled the sign-ups for one-time events to see what would be best. I was quite tickled when I attended a Deaf town meeting, and there was a voice interpreter there, speaking what was being signed by the deaf, for the hearing people present. Whenever I attended a hearing function that wanted to include the Deaf or hard-of-hearing, they seemed to have developed a good working relationship with Deaf interest groups. 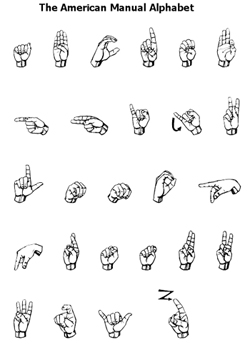 It will be interesting and educational to see what Zen Center will do in the future to make the Dharma available to these groups and cultures. I think a good way to get the ball rolling is for people to use me as a practice dummy! Wave “hi,” jot me a note, or send me an email. I am happy to teach you a sign, and I encourage learning finger spelling and sign language. And by all means, if you already sign, please do. I could use the practice! By the way, for those of you living in residence, signing is talking. We should avoid signing before the breakfast chant, and at other times of silence. Finally, check out other sources of information. The Internet is rich in information, and our local library has a Deaf center open to visitors of all hearing levels. Late last year, I compiled helpful information covering many aspects of Deafness, Deaf Culture, and hard-of-hearing issues. Entitled “The Emergence of Deaf Practice at San Francisco Zen Center,” it can be found here.