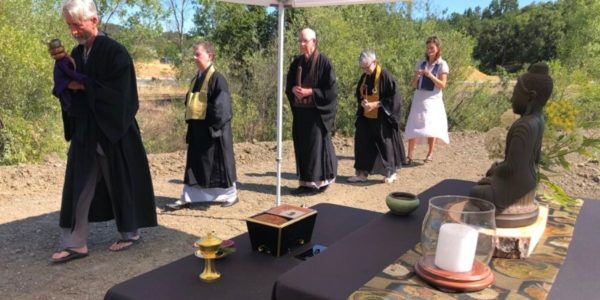 The Kendal Corporation, SFZC’s partner in Enso Village, announced the closing of a green bond sale this month that raised funds to cover development costs, including design, marketing, land acquisition, and construction.

Statement read by Susan O’Connell at the blessing:

We acknowledge the people who lived and walked and played and healed on this land before the Spanish arrived: The Pomo weavers, the Miwok dancers, the Wappo hunters, and the Patwin storytellers.

And the Anglo, Asian, and Spanish workers at the lumber mill who milled the trees that built this town.

We thank all those who said yes to the vision for a new way of honoring our aging process: the caring and creative humans at Greenbrier, Kendal, HKIT, Mithun, Lev Lane, and Gates. The responsible and responsive financial partners at Johnson Foundation, Ziegler, and New Island. The many wise and experienced consultants who continue to guide us, the team that marketed us, the city staff who gave us permission to start, and the depositors who saw clearly and responded.

We also thank all of those who did not share the vision or who said NO. It was thanks to them that we found the most appropriate team and the most beneficial way forward.

As Alan Chadwick said: “When you cultivate the earth, you are opening the ground to starlight.” But although there are benefits to constructing new and beautiful abodes, there is also harm. We want to ask forgiveness from the plants and animals who will be harmed or killed in the process of turning the earth and building in and on it: slugs and snails, gophers and moles, raccoons, rats and mice who may be poisoned and trapped, sowbugs, millipedes, earthworms who will be severed by spades, and numerous microscopic life-forms who will be burned by sunlight. We thank you and vow to continue to learn from you about our interconnected life.

We turn our kind attention to the skilled and diligent people of Weitz who will be on this land and will bring the dream of Enso Village into being. May they be safe from harm, may they free from suffering, may they be happy.