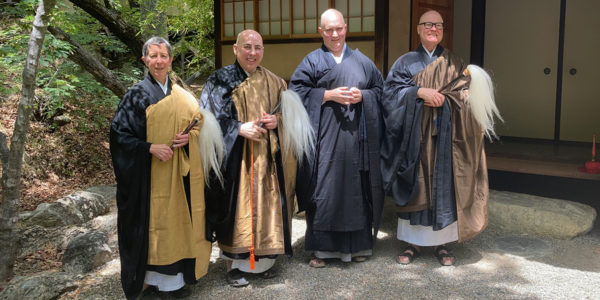 On May 22, Zenko Jordan Montgomery received shukke tokudo (priest ordination) from his teacher, Zenshin Greg Fain, along with co-preceptors City Center Abiding Abbot Tenzen David Zimmerman and Tassajara Tanto Shinchi Linda Galijan. Zenko has been a resident of Tassajara for six years, where he is currently the Tenzo (Head Cook); he is married to Lauren Bouyea.

The ordination ceremony in the Tassajara zendo was familiar and traditional, which felt utterly remarkable in light of the past year. The difference from past ceremonies was that it was streamed via Zoom to allow invited family members and friends to attend virtually. Zenko and Lauren’s 11-month-old daughter, Mirabelle, was also in the assembly, until she made it clear that it was nap-time.

The doors and windows were wide open to the bright, cool morning, and bird song filled the valley as Zenko received priest robes, okesa and rakusu that he sewed by hand, traditional lacquered wood formal eating bowls, and the sixteen Bodhisattva precepts. He then received lineage papers from his teacher with his Dharma name, Zenko Isshin (Zen Tiger, One Trust).

After the ceremony, there was a celebratory outdoor feast in the courtyard. The whole day felt all the more special because this was the first significant ceremony that had been held in the zendo in such a very long time. The joy in witnessing Zenko’s ordination was beautifully evident on everyone’s faces.